Home > Court of Appeals > About the Court > Judges
a 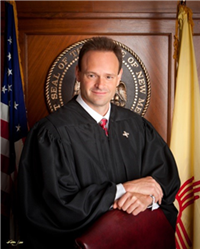 Biography:  J. Miles Hanisee has served as a judge on the New Mexico Court of Appeals since his appointment by Governor Susana Martinez in 2011. He was elected in 2014 and retained by statewide voters in 2018. Born in New Orleans, Louisiana, Judge Hanisee was raised in nearby Mandeville and in Taos, New Mexico, where his family relocated in 1986. He attended Louisiana State University, Pepperdine University School of Law, and in 1994 was sworn into the State Bar of New Mexico. That same year, Judge Hanisee began his tenures as a law clerk to Judges Oliver Seth, and then Paul Kelly, both of the United States Court of Appeals for the Tenth Circuit. As an Assistant United States Attorney from 1996-2007, Judge Hanisee tried cases in United States District Court, briefed and argued appeals in the Tenth Circuit, and was recognized by the FBI, ATF, and Department of Veterans Affairs for his lead role in prosecutions significant to local, national, and international law enforcement. In 2007, he formed the Law Office of J. Miles Hanisee, LLC, where he represented individual and corporate clients in criminal, civil, and administrative matters in both state and federal courts.

Judge Hanisee, his wife, and their twin children reside in Albuquerque. They enjoy weekends in Taos, tennis, skiing, hiking, and just about any sporting activity in which a winner can be declared.

Clerkship Opportunities: Chief Judge Hanisee is not accepting applications at this time. 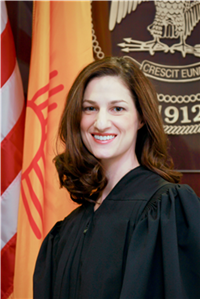 Biography:  Judge Jennifer L. Attrep was appointed to the Court of Appeals in 2018. Judge Attrep was raised in Los Alamos and is a graduate of Los Alamos High School. In 1999, she received a B.A. in Economics and Government from the College of William & Mary, summa cum laude. In 2006, she received a J.D. from the University of Virginia School of Law, where she served as the Managing Editor of the Virginia Law Review. Judge Attrep clerked for the Honorable Richard J. Leon in the U.S. District Court for the District of Columbia. Prior to returning home to New Mexico, Attrep practiced for several years at Williams & Connolly, LLP in Washington, D.C. on complex civil and criminal litigation. Judge Attrep then worked in private practice in Santa Fe, focusing on litigation and appellate work. In 2014, Judge Attrep was appointed to the First Judicial District Court, where she presided over a mixed docket of civil, criminal, and family law cases until joining the Court of Appeals. Prior to her legal career, Judge Attrep worked as an economic research analyst at the Federal Reserve Board in Washington, D.C. Judge Attrep lives in Santa Fe with her husband, Todd Coberly, and their daughter. 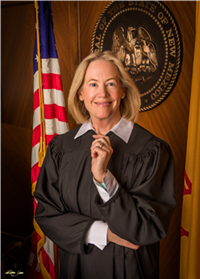 Judge Bogardus lives in Albuquerque with her husband. She enjoys traveling to visit with her children and grandchild, and takes advantage of New Mexico’s wonderful outdoor opportunities by hiking, bike-riding and skiing.

Clerkship Opportunities: Judge Bogardus has filled her clerkship positions through the end of the 2023 term but will have an opening beginning in September 2024. Applicants should submit a letter of interest, resume, law school transcript, at least two letters of recommendation, and writing sample.
Judge Bogardus also accepts law student externs on an ongoing basis. The externship is an unpaid position, however, normally a law student will receive school credit. If interested, please submit a letter of interest to her office. 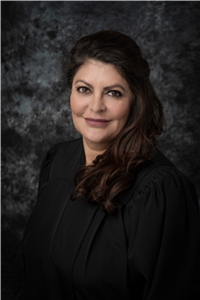 Prior to joining the Court, the New Mexico Supreme Court appointed Judge Medina to serve on the Court’s Appellate Rules Committee. Judge Medina also served as a Family Advocate and member of the Family Selection Committee for Greater Albuquerque Habitat for Humanity, organized and taught continuing legal education courses, served as a mentor to law students, served as a volunteer attorney bar examination coach, and twice graded the New Mexico Bar Examination.

Judge Medina lives in Albuquerque with her husband and daughter.

Clerkship Opportunities: Judge Medina has filled her clerkship positions through the end of the 2024 term.

Judge Medina accepts law student externs on an ongoing basis. The externship is an unpaid position, however, normally a law student will receive credit.  If interested, please submit a letter of interest to her chambers.

Biography: Judge Megan Duffy was elected to the New Mexico Court of Appeals in 2018. Judge Duffy graduated from the University of New Mexico with a B.A. in history and political science and earned her J.D. from the University of New Mexico School of Law in 2008, where she served as an editor on the New Mexico Law Review. After beginning her legal career as a judicial law clerk to Justice Richard C. Bosson at the New Mexico Supreme Court, Judge Duffy worked in private practice at a small civil litigation firm in Albuquerque. Her work as an attorney focused on estate, insurance, and consumer protection matters.

In addition to her legal career, Judge Duffy co-founded Albuquerque Involved, a non-profit that contributes to the community through monthly grant-giving and community service projects. She is an avid runner and enjoys rock climbing all around our beautiful state.

Clerkship Opportunities: Judge Duffy has filled her clerkship positions through the end of the 2023 term but will have an opening beginning in September 2024. If interested, please submit a letter of interest, resume, law school transcript, writing sample, and at least two references or letters of recommendation by mail (or hand delivery) to the address above. Judge Duffy is happy to receive applications for law student externs on an ongoing basis. The externship is an unpaid position but may qualify for law school credit. If interested, please submit a resume, letter of interest, unofficial transcript, and writing sample to her attention at the Albuquerque Court of Appeals office at 2211 Tucker Ave. NE. 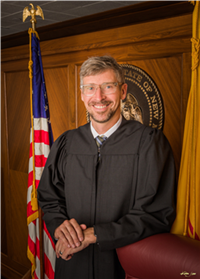 These cases took Judge Ives to many different cities and towns in New Mexico and in other states. While in private practice, Judge Ives volunteered to handle many matters pro bono and served as court-appointed counsel for a large number of indigent clients. The New Mexico Supreme Court also appointed Judge Ives to serve as a member of the New Mexico Criminal Uniform Jury Instruction Committee and later as the chair of that committee, a position he held for six years.

Clerkship Opportunities: Judge Ives is not accepting applications at this time.

Biography: Judge Shammara H. Henderson was appointed to the Court of Appeals in 2020 by Governor Michelle Lujan Grisham. Born and raised in Albuquerque, NM, she graduated from Valley High School. She received a bachelor’s degree from American University in Washington, D.C., where she received a full ride with the highly competitive Frederick Douglass Scholarship. She received her J.D. from the University of New Mexico School of Law where she received the W.E. Bondurant Scholarship and University of New Mexico Graduate Fellowship.

After graduating from law school, Shammara clerked for Justice Charles W. Daniels at the New Mexico Supreme Court. She started her career as a litigator with the Second Judicial District Attorney’s Office. She later became the Associate General Counsel for the Office of Governor. In 2011, Judge Henderson joined the United States Attorney’s Office for the District of New Mexico. She successfully tried criminal and civil cases in the United States District Court and appealed criminal cases in the Tenth Circuit. She developed and presented training and outreach programs across the state for law enforcement as well as community organizations and churches. In 2017, Judge Henderson co-founded her own law firm Henderson & Grohman, PC, which joined Freedman, Boyd, Hollander, Goldberg, Urias, & Ward, PA in October of 2018 where she represented clients in criminal, civil, and administrative matters in both state and federal courts at the trial and appellate level.

Clerkship Opportunities: Judge Shammara H. Henderson is accepting applications for a term clerk starting January 2023 through the end of August 2023. Applicants should submit a letter of interest, resume, law school transcript, at least two letters of recommendation, and writing sample. Applications can either be submitted by mail or delivered to the Court. 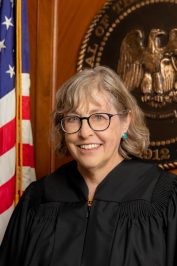 Biography: Judge Jane Yohalem was appointed to the New Mexico Court of Appeals by Governor Michelle Lujan-Grisham on June 20, 2020. She was elected by the voters in November 2020. Judge Yohalem received her undergraduate degree from Yale University in 1972, her law degree in 1975 from Columbia University, and a masters of law degree from Georgetown Law Center in 1976. She worked for ten years for the Mental Health Law Project (now the Bazelon Center) litigating civil rights cases for children with disabilities.

After moving to New Mexico, she practiced labor, employment and civil rights law. Since 1996, she represented New Mexico clients on appeal before our Court of Appeals and Supreme Court in virtually every area of the law. Judge Yohalem is a member of the prestigious American Academy of Appellate Lawyers. 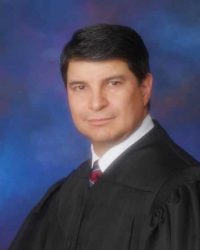 Biography: Judge Gerald E. Baca was appointed to the New Mexico Court of Appeals by Governor Michelle Lujan-Grisham in April 2021.

Judge Baca is married, and he and his wife have two adult children and three grandchildren.

Judge Baca’s avocation away from the Court is that of sports officiating. He is a high school sports official in Football, Soccer, Basketball, Wrestling and Baseball. He also enjoys reading, playing racquetball, and weight training.

Judge Baca also accepts law student externs on an ongoing basis. The externship is an unpaid position, however, law students can normally receive school credit. If interested, please submit a letter of interest to his chambers mailing address in Santa Fe. 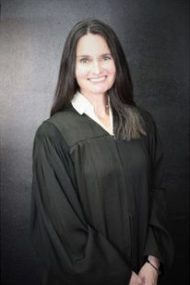 Biography: Judge Katherine Wray was appointed to the Court of Appeals in 2021. Judge Wray graduated from Punahou School in Honolulu, Hawai’i and later, Pennsylvania State University, with a B.F.A. in stage management. After working in professional theater for several years, Judge Wray earned her J.D. from the University of New Mexico School of Law. Judge Wray began her legal career as a law clerk to the Honorable Celia Foy Castillo on the Court of Appeals and to the Honorable M. Christina Armijo on the United States District Court for the District of New Mexico.

Judge Wray lives in Albuquerque with her family.